Dota 2 is a free-to-play multiplayer online battle arena (MOBA) video game developed and published by Valve Corporation. The game is the stand-alone sequel to Defense of the Ancients (DotA), which was a community-created mod for Blizzard Entertainment's Warcraft III: Reign of Chaos and its expansion pack, The Frozen Throne. Dota 2 is played in matches between two teams that consist of five players, with both teams occupying their own separate base on the map. Each of the ten players independently control a powerful character, known as a "hero", that each feature unique abilities and different styles of play. During a match, a player and their team collects experience points and items for their heroes in order to fight through the opposing team's defenses. A team wins by being the first to destroy a large structure located in the opposing team's base, called the "Ancient".

Development of Dota 2 began in 2009 when IceFrog, the pseudonymous lead designer of the original Defense of the Ancients mod, was hired by Valve to create a modern sequel. Dota 2 was officially released on Steam in July 2013 for Microsoft Windows, OS X, and Linux-based personal computers, following a Windows-only open beta phase that began two years prior. Despite some criticism going towards its steep learning curve and complexity, the game was praised for its rewarding gameplay, production quality, and faithfulness to its predecessor. The game initially used the original Source game engine until it was ported over to Source 2 in 2015, making it the first game to use it. Since its release, Dota 2 has been the most played game on Steam, with peaks of over a million concurrent players. The popularity of the game has led to official merchandise being produced for it, including apparel, accessories, and toys, as well as promotional tie-ins to other games and media. The game also allows for the community to create custom game modes, maps, and cosmetics for the heroes, which are then uploaded to the Steam Workshop.

Dota 2 has a widespread and active competitive scene, with teams from across the world playing professionally in various dedicated leagues and tournaments. Premium Dota 2 tournaments often have prize pools totaling millions of US dollars, the highest of any eSport. The largest of them is known as The International, which is produced by Valve and held annually at the KeyArena in Seattle. Valve also sponsors smaller, but more frequently held tournaments known as the |Majors, which lead up to the International every year. For larger tournaments, media coverage is done by a selection of on-site staff who provide commentary and analysis for the ongoing matches, similar to traditional sporting events. Broadcasts of professional Dota 2 matches are streamed live over the internet, and sometimes simulcast on television networks, with peak viewership numbers in the millions. 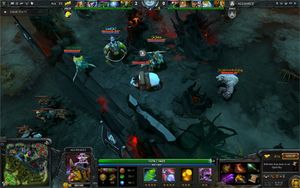 A game of Dota 2 in progress, showing the Dire team at one of their entrances to their base

Dota 2 is a multiplayer online battle arena (MOBA) video game in which two teams of five players compete to collectively destroy a large structure defended by the opposing team known as the "Ancient", whilst defending their own. As in Defense of the Ancients, the game is controlled using standard real-time strategy controls, and is presented on a single map in a three-dimensional isometric perspective. Ten players each control one of the game's 113 playable characters, known as "heroes", with each having their own design, benefits, and weaknesses. Heroes are divided into two primary roles, known as the "carry" and "support". Carries, which are also called "cores", begin each match as weak and vulnerable, but are able to become more powerful later in the game, thus becoming able to "carry" their team to victory. Supports generally lack abilities that deal heavy damage, instead having ones with more functionality and utility that provide assistance for their carries.

All heroes have a basic damage-dealing attack, in addition to powerful abilities. Each hero has at least four abilities, all of which are unique, which are the primary method of fighting. The most powerful ability for each hero is known as their "ultimate", which requires them to have an Experience point|experience level of six in order to learn and use. In order to prevent abilities from being spammed without consequence, a magic system in the game exists. Activating an ability costs a hero some of their "mana points", which regenerate slowly over time. Using an ability will also cause it to enter a cooldown phase, in which the ability can not be used again until a timer counts down to zero. All heroes have three attributes: strength, intelligence, and agility, which affect health points, mana points, and attack speed, respectively. Each hero has one primary attribute out of the three, which adds to their non-ability basic damage. Heroes begin each game with an experience level of one, only having access to one of their abilities, but are able to level up and become more powerful during the course of the game, up to a maximum level of 25. Whenever a hero gains an experience level, the player is able to unlock another of their abilities or improve one already learned. Heroes also have an ability augmentation system known as "Talent Trees", which allow players further choices on how to develop their hero. If a hero runs out of health points and dies, a timer begins to count down until they respawn in their base. 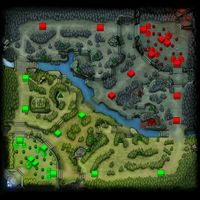 An older version of the in-game mini-map representing the game's playing field, showing the Radiant side in green and Dire side in red

The two teams—known as the Radiant and Dire—occupy fortified bases in opposite corners of the map, which is divided in half by a crossable river and connected by three paths, where are referred to as "lanes". The lanes are guarded by defensive towers that slowly, but frequently, attack any opposing unit who gets within its line of sight. A small group of weak computer-controlled creatures called "creeps" travel predefined paths along the lanes and attempt to attack any opposing heroes, creeps, and buildings in their way. The map is also permanently covered for both teams in fog of war, which prevents a team from seeing the opposing team's heroes and creeps if they are not directly in sight of an allied unit. The map also features a day-night cycle, with some features and mechanics being altered depending on the time of the cycle.

Items known as "wards" are able to be placed in most locations on the map, granting line of sight vision in a small area around it for the team who had planted it. Wards last for six minutes after being placed, and will disappear once time runs out or if discovered and destroyed by the opposing team. Also present on the map are "neutral creeps" that are hostile to both teams, and reside in marked locations on the map known as "camps". Camps are located in the area between the lanes known as the "jungle", which both sides of the map have. Neutral creeps do not attack unless provoked, and will respawn over time if killed. The most powerful neutral creep is named "Roshan", who is a unique boss that may be killed by either team to obtain an item that allows a one-time resurrection by the hero that holds it. Roshan will respawn around ten minutes after being killed, and becomes progressively harder to kill as the match continues over time.

In addition to having abilities becoming stronger during the game, players are able to buy items that provide their own special abilities. Items are not limited to specific heroes, and can be bought by anyone. In order to obtain an item, players must be able to afford it with gold, which is primarily obtained by killing enemy heroes, destroying enemy structures, and killing creeps, with the latter being an act called "farming". Only the hero that lands the killing blow on a creep obtains gold from it, an act called "last hitting", but all nearby allies receive gold when an enemy hero dies. Players are also able to "deny" allied units and structures by destroying them, which then prevents their opponents from getting full experience. Gold can not be shared between teammates, with each player having their own independent stash. The player also receives a small, continuous stream of gold over the course of a match.

Dota 2 also occasionally features seasonal events that present players with alternative game modes that do not follow the game's standard rules. Some of these included the Halloween-themed Diretide event, the Christmas-themed Frostivus event, and the New Bloom Festival, which celebrated the coming of spring. In October 2015, a Halloween-themed "capture point" game mode was released, titled "Colosseum". The move to the Source 2 engine in 2015 also saw the addition of community-created custom game modes, with the more popular ones having dedicated server hosting by Valve. In 2016, Valve introduced the "Custom Game Pass" option to custom game modes, which allows content creators to add exclusive features, content, and other changes to their game mode.