Counter-Strike: Global Offensive (abbreviated as CS:GO) is a multiplayer first-person shooter video game developed by Hidden Path Entertainment and Valve Corporation. It is the fourth game in the main Counter-Strike franchise. Counter-Strike: Global Offensive was released for Microsoft Windows, OS X, Xbox 360, and PlayStation 3 in August 2012, with the Linux version being released in September 2014. It features classic content, such as revamped versions of classic maps, as well as brand new maps, characters and game modes. Cross-platform multiplayer was planned between Windows, OS X, Linux, and PlayStation 3 players, but was ultimately limited to Windows, OS X, and Linux because of the difference in update-frequency between systems.

The gameplay in Global Offensive is similar to that of the previous games in Counter-Strike series in the sense that it is an objective-based multiplayer first-person shooter. Players play as one of two teams; the Terrorists or the Counter Terrorists, with both teams having different objectives: the Terrorists' being to plant the bomb and have it explode or to protect the hostages, depending on the map, and the Counter-Terrorists' being to prevent the bomb from being planted and exploding, or to rescue the aforementioned hostages. At the start of every round players get the opportunity to purchase weapons and equipment with their money that is awarded based on their performance in the previous round. Winning rounds results in more money than losing, and completing objectives such killing enemy players results in more money. Negative actions, such as killing teammates, will result in a penalty. 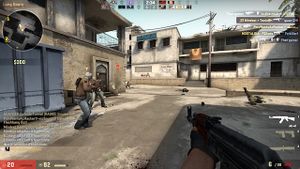 Screenshot of an in-progress Casual match, in which the player is using the AK-47.

Matchmaking is supported for all online game modes through the Steam software, and because it is Valve game, it runs Valve Anti-Cheat to prevent hackers. In the competitive modes, players are encouraged to act more strategically in CS:GO than in other games because of the lack of the ability to respawn. When playing competitive, each player has a rank based on their skill level and will be paired up with and against players of around the same skill level. Prime Matchmaking is available to players who have verified their account by inputting their phone number. This was introduced to try to prevent legitimate players from playing with hackers, The PC version of Global Offensive supports private dedicated servers that the player may connect to through the community server menu in-game. These servers may be heavily modified and in turn, can be completely different from the base game. There have been many community made mods for CS:GO, one of the more popular ones being a mod which allows players to complete obstacle courses that require advanced strafing and jumping techniques.

There are six different gamemodes in CS:GO. These consist of Competitive, Casual, Arms Race, Demolition, Deathmatch, and Weapons Course. All of these options have both online or offline options except the Weapons Course which is offline only. Competitive mode is the most serious mode out of all of them, with players being put into a 5v5 match that takes around 45 minutes to complete. Arms Race mode is similar to the "Gun Game" mod for other games in the series. It consists of players racing to upgrade their guns via killing enemies. Demolition mode is again like the "Gun Game" mod, but in Demolition the players are able to plant and defuse the bomb too, and only receive a gun upgrade at the end of the round if they killed an enemy. Casual mode is a toned down version of the competitive mode as it has both team damage and collision disabled. In Deathmatch mode, there is no real objective except to kill the enemy players. Players instaspawn after death, meaning the action is almost continuous. It is most popularly used to practice and learn how all of the guns function. The Weapons Course is an offline practice mode designed to help new players learn how to use the basic items, such as grenades and guns.

CS:GO added new weapons and equipment not seen in previous installments, most notably the firebomb for each side (referred to as a Molotov on the terrorist side and as an Incendiary Grenadeon the Counter-Terrorist side). These temporarily cover a small area in fire, dealing damage to anyone passing through. The game also saw the introduction of the Zeus taser and a range of new guns, including shotguns, pistols, and sub-machine guns. Two new gamemodes, Arms Race and Demolition, were added, along with a total of eight new maps for said gamemodes. Both of these gamemodes are variations of mods for the other games in the Counter-Strike series.